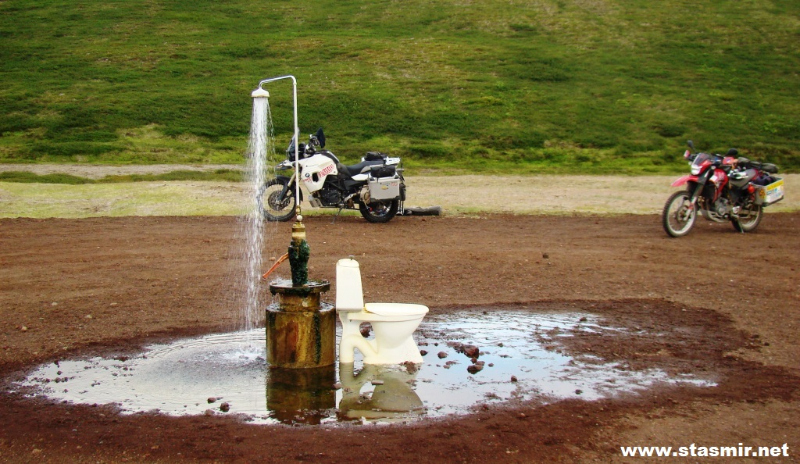 Last summer my nephew went to Iceland with the sole purpose of writing his Motorcycle Diaries for this site. Having been stuck in limbo between Iceland and Portugal I am late posting his amusing account, for which I sincerely apologize. Susanin’s story does not only deal with outlandish subjects, such as adverse impacts of volcanic ash on bike’s fork seals, but also casts some light on topics of universal appeal of which the centuries-long strife between the Man and his deadly opponent, the Icelandic Sheep, is the most prominent. An unsolved crime is at the heart of the narrative which also features Ze Germans: was there ever a good read without Ze Germans involved? The original was posted on this specialist site and I might do a Russian summary at some point – once I am done with the very important business of being stuck in limbo. Enjoy this excellent story and do not attempt a Viking-Biking Ride at home!

As soon as I found out I was going to Iceland, I started looking for motorcycle rental places. I found http://www.bikingviking.is through some advrider post, and made a reservation. I couldn’t reasonably justify a week rental (200 euro/day with mandatory insurance included) especially with my parents also there and renting a car, so I settled for a day. I showed up and forked over the money, and got a nice 800, but the road-going version, not the dualsport. Though it was wearing knobbies. which was obviously a necessity. I have 0 dirt experience, so I figured I’d stay out of the complicated stuff, and figured alloys would do just as well. 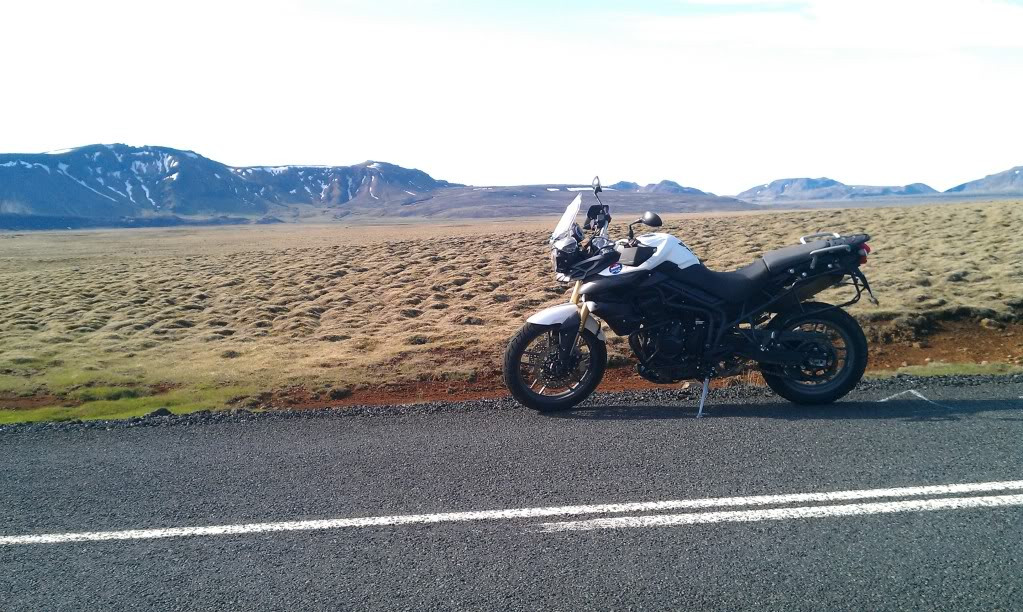 The Triumph proved to be quite a capable machine. It’s pretty quick (though it’s hard to think in km so I was never quite sure how quick), it handles the gravel and sand and all the other Icelandic stuff well. It did quite well on-road, though it’s hard to push it with low speed limits and lots of loose stuff on paved roads. It’s a little heavier and taller than the sv, so it wasn’t like I was going to go drag pegs somewhere. It had an interesting lazy turn-in feeling (probably because of the large front wheel and extra weight compared to all my previous bikes), but other than that it felt great in the corners. In the gravel/chip/sand roads it did very well. It was easy enough to ride and even with no real prior dirt experience, just some poorly paved US roads, I had no problems maintaining traction. 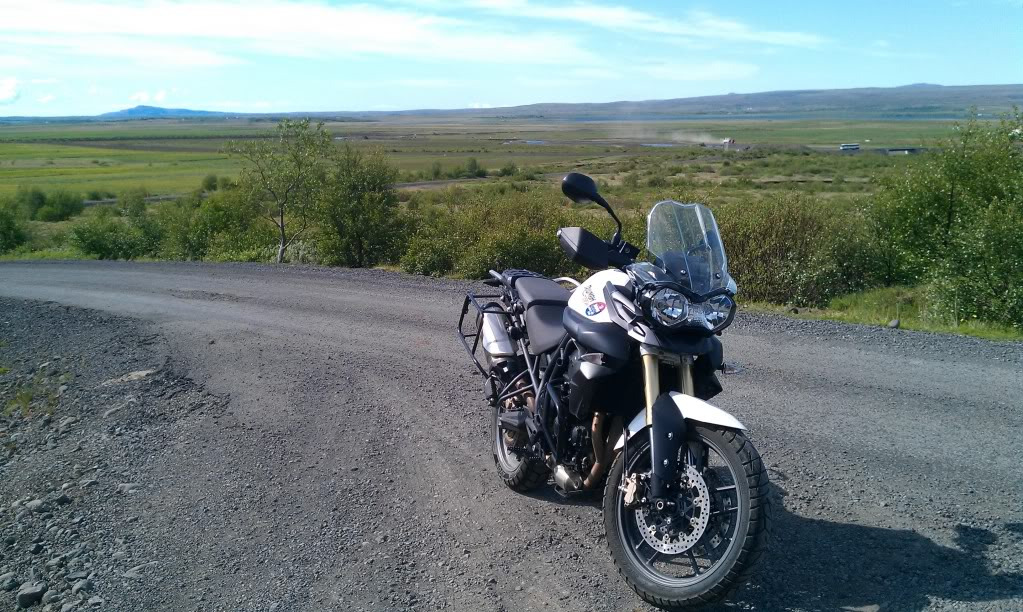 The windshield is a big help in the cold, though because of the ribbed design, you don’t really want to tuck behind it since it skews everything when you look through it. It also did the thing every windshield does, which was put the turbulence at my face at some speeds. If it were my bike, I’d either need a taller or shorter one, or I’d have to adapt my body position or something, anyway, not enough time at real speeds to judge. The engine is great with power pretty much everywhere; 80km/h in 6th or 80 in 2nd only really changes the sound. Instrumentation (in C and km) is easy to see and because of the low speed limits and aggressive enforcement, I was watching it a lot to keep the speeds legal.

The only problem I had, was by the end of the day it blew a fork seal (the guy explained that because of all the gritty, sharp, volcanic ash in the sand, this is a regular occurrence for bikes in Iceland). 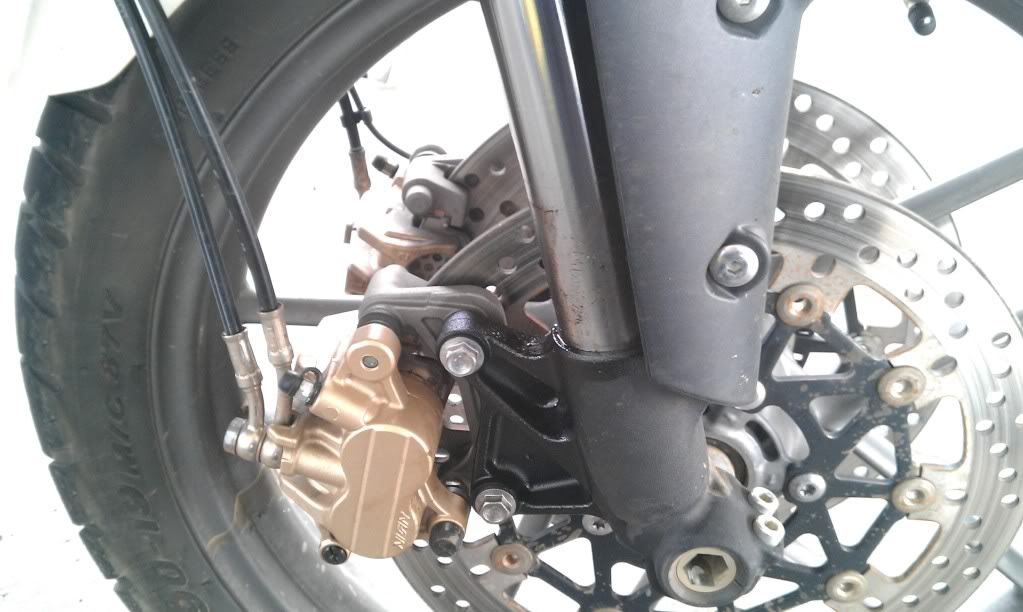 I Watch, As Ze Germans Lose Their Motorcycle

In a country with an effective crime rate of “only drunk kids near bars and an occasional dispute over a sheep” I would not have expected to witness grand-theft-moto. Oddly enough, I did, and I didn’t even know what was happening until well after it was over.

Pulling up to the Geysir tourist spot, I saw a flock of similar, obviously rented since they were all identical, tigers and f650 BMWs parked off to the side. As I pull up, I see a rider piling on a bike wearing a rather large backpack (I thought something along the lines of “that must be annoying to ride with”. I wave, he waves back. What struck me as odd, was that he was wearing a ¾ helmet but no eyepro. Since squiddery is a daily thing I see, I figured that was his personal silly choice and gave it no further thought. He rode off. A minute later, I see all the rest of the bimmer crowd (speaking German) running towards their bikes. Apparently, the rider I saw found the key in one of the bikes, and instead of hitchhiking or whatever, he decided to make much better time on someone else’s two wheels. Yes, the renter failed to follow the cardinal rule of finding your bike where you left it, not leaving the key in the ignition. A couple of the Germans tore off after him, but came back a few minutes later with no success. Sure the guy is on an island, but it’s a large island and one with lots of places to crash. When I got back to the rental place later, the guy at the desk said it is a big ($20k+) problem for the renter because insurance won’t cover the damages if the bike was left with the key. Apparently European insurance only covers actual theft, not losing a bike through stupidity. 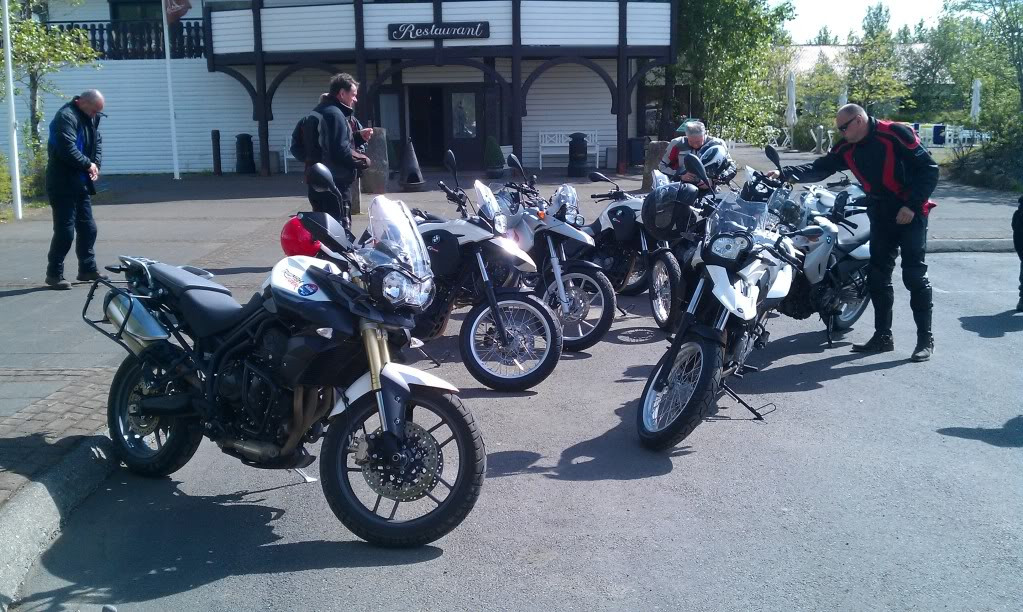 Even in an obviously safe country, with lots of onlookers, bikes can go missing and cause a bit of a headache and wallet pains. There was an interview in hfl or some other mag with a pro motorcycle thief who said “lock your bike, don’t make my job easy” and this clearly shows the soundness of the advice. The thief was most likely not a pro, he was joyriding, and the renter made it easy for even the unskilled to take his bike.

After picking up the bike, instead of following the lame tourist 1-lane (there are no highways), I found a gravel road out of town. Regular roads in Iceland all have a speed limit of 90km/hr which is something like 50mph. And everyone drives roughly the speed limit. The gravel roads are 80km/hr if you think you can. Some roads 20 seems excessive. Anyway, I basically lobbed myself in the general direction of where I was going, and found some gravel up a mountain. Then I found some asphalt up and down a mountain. Then I found a road that ran along a lake. All of these are built around lava flows and such, so there are lots and lots of turns and elevation changes. There are also very few guardrails, and a wall on one side and a drop on the other. So you can’t go very fast, but it’s still quite challenging. Oh yeah, there’s crap on the roads, blind hills and turns, surprise “pavement ends in 50 meters” signs, sheep (these are freaking everywhere), crazy birds that divebomb you, and so on. So you can’t go hauling ass. And you don’t care that you’re not going fast, it’s still fun as hell and the scenery is ridiculous. It’s like riding on mars in some places and like the alps in others, and Frodo needs to take the ring up that mountain there and so on (I’ll post pics eventually).

Speaking of sheep, they are all over the place. With every mother-sheep, there are pretty much always two baby sheep. They have the most ridiculous survival instincts possible. It’s not “run away from danger” it’s “run to mom even though there’s a motorcycle in the way”. They’re easier to spot and slower than deer, so you have plenty of time, but you have to watch them. Then there’s farmers that chase them around. They apparently don’t do sheepdogs, nor do they do fences very well (I guess they get blown away by wind, washed away by floods, and volcanoed on occasionally.

Having eventually made it to Pingvellir (spelling changed since I don’t have Icelandic letters on my keyboard…) I saw the crack between two continental plates (unimpressive though pretty cool in theory). Then I headed on towards the Geysir. On the way I found a kickass gravel road which abruptly ended about 100m before linking up with real road (I guess to keep the tourists out, or maybe because something flooded or lava or whatever). So I got to try crap-road a bit. Not so bad though I stalled the bike trying to get up the hill (soft ground so I was trying to go slow and went a bit too easy on the throttle).

Speaking off off-road. There is yet another class of road in Iceland. This kind of road requires a BUILT 4×4 (not some BS like a f150 on 35” tires, but a seriously lifted, huge-tired monstrosity) or a serious motorcycle. And they told me I wasn’t allowed on them, something like 1k euros fine because the insurance doesn’t apply on them.

The ones I encountered were closed anyway due to thawing or something. But if you take a full BikingViking tour these are where it’s at it seems, with river crossings, up and down steep hills, etc. Basically like the video above but for miles and miles. 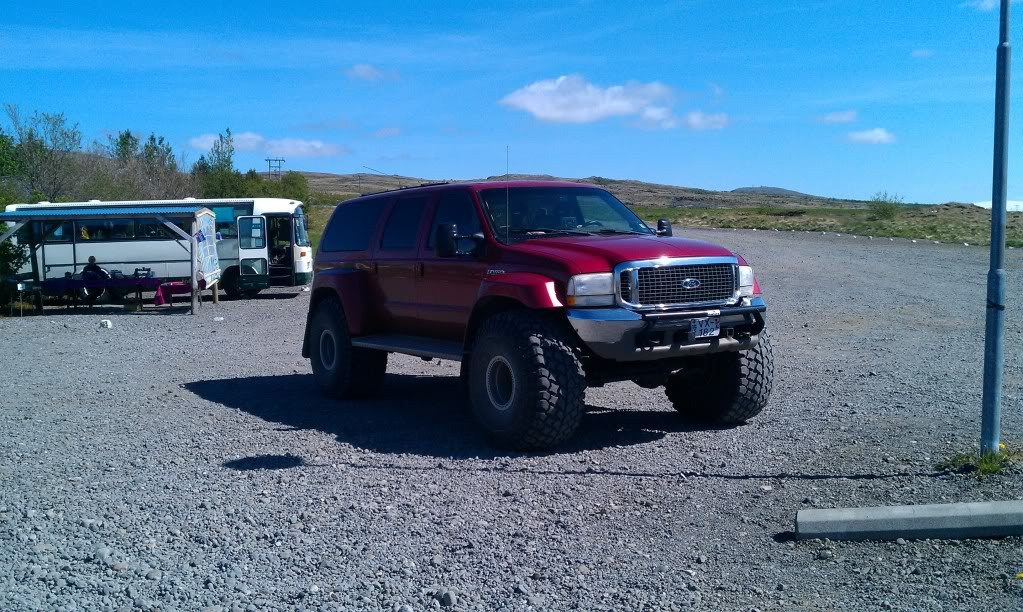 After this little practice, I ended up just riding to Geysir where Ze Germans failed to maintain ownership of their vehicles… After that, I went riding further, then further yet, and then some more. Then I took a unplanned detour that lead me 50km each way (I looked at the map, thought I’d check it out, but all that was there were some kickass landscapes, some hydroelectric ****, and Iceland’s most boring road, #26 50km of STRAIGT gravel sand and rock road without turns… seriously, WTF mate?).

In the middle of this road, I found some guy changing a tire on a car, that must suck to be miles away from ANYONE and broken down. So I slowed down so I wouldn’t have to camp overnight waiting for a tow. And then I sped up because it started raining and rain in 5C (40f?) weather didn’t seem too much fun. By the time I reached coffee, the rain stopped, and the sun was out (there’s a tshirt that explains this) 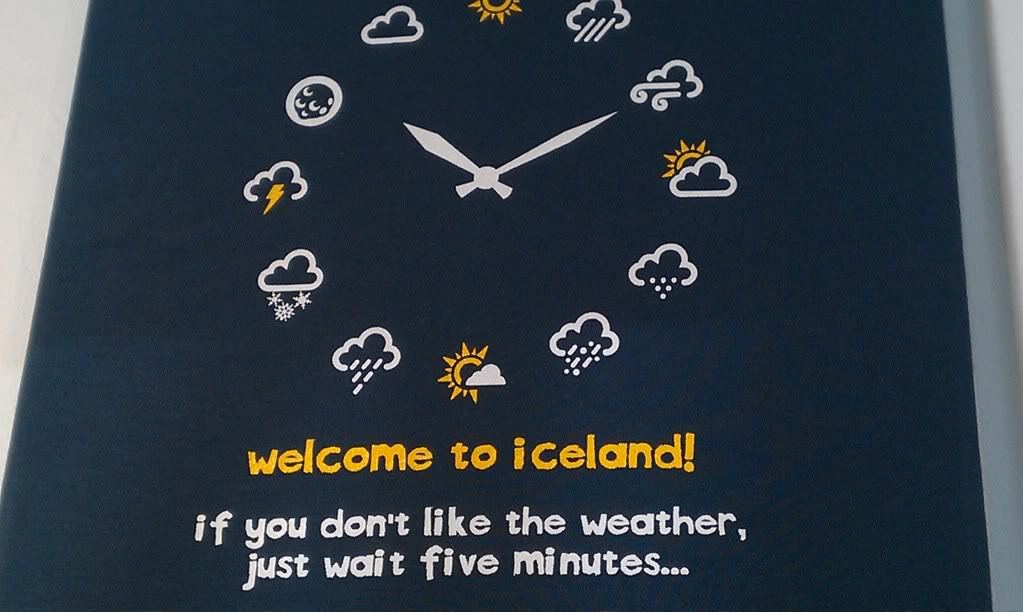 So yeah, lots and lots of gravel in various flavors.

After that, my contour decided to ESAD, probably too cold for the battery, so all I’m left with for the next 3 hours is more of the “I stopped to take a picture” shots. Lots of gravel up and down mountains, lots of scenery, and a pretty kickass bike (despite the allegedly common for Iceland fork seal suckage).

Oh, one more thing, Icelandic gas stations. The epitome of WTF is going on. Apparently our credit cards don’t play nice with their gas station readers. Their automatic pumps expect a pin number. The problem is, even after entering my pin, it didn’t like any card I gave it. So I’d have to go inside. The way these stations work though, the people inside have nothing to do with the gas, and everything to do with snacks and drinks and burgers. All they could do is sell me a “prepaid gas card” in 3000kr or ~$25 increments. And each gas station brand has their own. Or they’re not there at all (fully automatic station but “their” credit card required). There was only one we found that did a “fill her up”. Maybe I’m missing something, but it was a bit on the annoying side.

It was a long day, it was cold, I was wearing lame pieced-together gear (don’t really ride in 40f) and hiking boots, it was totally awesome and I think the best way to experience a new country. If you’re wondering if you should, you totally should do it. And do the week. A day isn’t enough.